The most prestigious award in concrete flooring 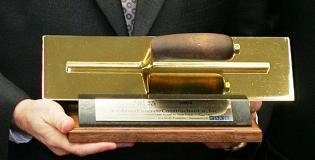 Presented by Face® Construction Technologies, Golden Trowels recognize the flattest and most level floor slabs placed in the world in the previous contest year. To date, 336 Golden Trowels have been presented to 137 different contractors on five continents. Golden Trowel® Gold Plates are awarded to the winner in each category; Golden Trowel® Silver Plates recognize outstanding entries that did not win their category.

A special Golden Trowel®, The “Sam” Award, was established in 2002 to honor “outstanding accomplishments in and contributions to the art and science of high quality horizontal concrete construction.” The Sam is named in honor of Samuel A. Face, Jr., the late Chairman of The Face Companies.

Winners are announced each year at The World of Concrete in Las Vegas.

Email Dipstick@Faceco.com for an official application.

The Face Companies developed the Golden Trowel® criteria for the Laser Screed categories with the cooperation of Somero® Enterprises beginning in 1990 contest year.